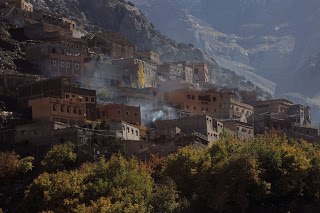 Uncertainty excites me but the recent thrill of the Tiz n Test drive is forgotten in this village, where routine is reassuring. I’ll get complacent and never leave.
So I look at this non challenge as a new challenge.
The early call to prayer is comforting. Echoes through the crisp valley encourage others to join. Committed people out there in the darkness, getting ready for the day. I’m in Imlil, a trekking base for the hike up Toubkal, high in the bare Atlas.
The balcony door’s been open all night, staying wide from us staring at the Milky way, counting shooting stars, linking sentences with five minute pauses.
Silent spaces for effect.
The mosques tin speaker crackles off and its quiet again. I’m awake, listening for clues of the day.
A crunch of gravel, more a shifting donkey than anyone with intent. It’s the only sound they make, or a resigned snort under load. I can’t work them out, as indifferent to affection as to poorly loaded gas bottles, or side saddle city girls on the climb to the kasbah. I hope they’re happy.
A river rock rolls under the flow of the last melt from the surrounding peaks. Locals say it’ll be another two weeks before the snow’s back.
Cocks crow at just the right volume. The village is waking up, like it always wakes up. Nothing changes up here. A dog barks, settling quickly, more of a good morning test than a threat. Lucky the biker that lives at the top of the hill,  freewheeling acceleration gets him started on a cold morning. Speeding up, it grabs fuel and fires the engine for work below. Far down, a truck under heavy load finds the ideal gear, sticking with it on its way up. Hope he misses the bike rider on that narrow bend. The whine comes and goes through the trees, getting louder as it makes a statement past our dar, then grinds its way onwards and disappears. Listening closely, minutes later, you’ll still hear him higher up. Basic senses seem sharper when we’re not overloaded.
A few clenches squeeze the chill from my fingers to write. An early delivery is on a bicycle down the hill, jammed in the basket. Work gives purpose. His chain grips, countered by thinning brakes on grating rims. Smoke from the bakery promises sponge bread and a blister pack of hard butter.
Then two rounds of coffee and a walk past the almond butter shop. The mill hasn’t stopped, churning round at the same speed as yesterday. It’ll soon be time for prayers again.
Deon
Twitter: deon_bing
#Morocco #Imlil